I Used to Roll the Dice, Feel the Fear in My Enemy's Eyes

It's been a long journey since my sword-fellows came down, bloodied and victorious, from White Plume Mountain, back in the heady go-go D&D days of the late 70s. The Keep on the Borderlands was but a humble ale stand in those bygone days. Many of that lost Fellowship of the Flayed Goblin--among them my brother Eric and Hal, and some newer war brothers (10-15 years of campaigning), Barticus and my son Daniel, always a loyal Ranger. Only the Mighty Caveman was truly missed from this noble ensemble as we tackled D&D 4th Edition for the first time and its kickoff module, H1: The Keep on the Shadowfell.

For D&D purists, I have alarming news: the Mighty Empire has finally come under the sway of the online gaming world. Though I shed a tear, let's be honest: it probably had to happen.

For online gamers, I have even more alarming news: you were actually playing D&D all of these years anyway. You laughed at the nerds at the lunch table in high school, but they were all smarter than you and went out and wrote computer games based on their favorite pasttime, D&D, and then you started playing them--EverQuest, World of Warcraft, Guild Wars, and more. Truly, it must be like finding out that the hot chick you were dating was actually a dude living in his mother's basement in disguise.

So D&D 4E is a super-pimped-up version of our former beloved game, where you can easily take on powers and skills that you used to only dream of attaining in some faraway level. Even our self-proclaimed "chaos gamer" Barticus, who never met a dark elf assassin with quadruple backstab skills using an enchanted double-damage dagger that he didn't like, expressed surprise at the torqued-up characters. You also take "healing surges" an online gaming conceit that make you less killable than ever before.

But guess what, the bad guys are juiced also. We merrily waded into a kobold ambush expecting to bat them aside like a swarm of scaly flies only to find my own dwarf fighter Bridgit Brokefoot (of the glass armor) going down three times in a row and needing the noble healing power of my Dragonborn paladin Leonid (who speaks in a Russian accent, continuing the annoying trend I began with the Jamacian accent of my old-school fighter/magic user/thief Pollux).

I could write more about a lot of the nuances (and probably have written too much already), like missing races and alignments and classes that we used to favor, replaced by things we don't understand and can't pronounce, but your mileage can and will vary.

Suffice to say we played twice over Thanksgiving and the new Fellowship of the Flayed Goblin--Bridgit and Leonid, Frax and Don, and two people whose names I can't pronounce so I called them Jan and Lawndart (two Rangers, two Fighters, a Paladin and a Warlock; I know, not a super-balanced party) liked it well enough and will soldier on and try to solve the secrets of the Shadowfell, over Christmas break. More adventures later.

Until then, give me a shout at johnoakdalton@hotmail.com.
Posted by John Oak Dalton at 5:44 PM 1 comment:

So Doug Jones came to talk to my wife's class; the guy also known as the Silver Surfer, Abe Sapien, the two main dudes in Pan's Labyrinth, and Hocus Pocus, the part I saw him in, over and over, when my daughter was young. He was invited back to his alma mater as one of its more well-known alums, along with people like David Letterman, Joyce DeWitt, Cynda Williams, Papa John, the dude that draws Garfield, and--several thousand people down the list--your humble blogger.

Doug and I actually have a lot in common. Once upon a time, Doug was Ball State's mascot, Charlie Cardinal; and I watched him be that mascot.

We actually share one other tenuous thread. Doug's good friend Hunter Austin played one of the leads in Among Us, a Bigfoot movie I scripted several years ago that has had rather sturdy legs; if you are a Canadian, you can catch it some lazy, snowy afternoons on SPACE-TV, and if you live in the States you can find it in a lot of dollar bins of DVDs.

I will be a Hunter Austin fan as long as I live, because she was the first actress I ever heard speaking one of my lines; unfortunately, as longtime readers have heard before, that line had the word "cornhole" in it. And not the good kind.

Anyway, my wife mentioned this connection to Doug Jones, who astounded her by saying he had watched the movie. I truly believe that up until that point in time, my wife did not believe that anyone had ever watched a single one of the movies I had ever worked on. Like a sports team that is more popular on the road than at home, I really don't have any street cred at my own alma mater; so I have to thank the Silver Surfer for giving me some.

Until later, I am at johnoakdalton@hotmail.com.
Posted by John Oak Dalton at 8:48 PM 1 comment:

Ain't Nothing Like The Sky To Dose A Potion

Some British people selected the top 50 horror films of all time and then some other dudes decided to make a blog meme out of it, showing in bold the ones you HAVEN'T seen. Let's see how much I'm keepin' it real, shall we?

Like any list, I don't totally agree with this--it leans a bit heavily on newer films, and makes only token nods to some great foreign genres--but I did better than I thought. No doubt there is some flat-out scary stuff in the first dozen or so. And respect for including Hoosier director Robert Wise!

Give me a shout at johnoakdalton@hotmail.com.

Posted by John Oak Dalton at 12:06 PM No comments:

Email ThisBlogThis!Share to TwitterShare to FacebookShare to Pinterest
Labels: Memes 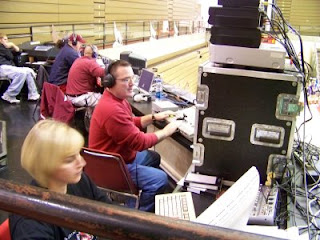 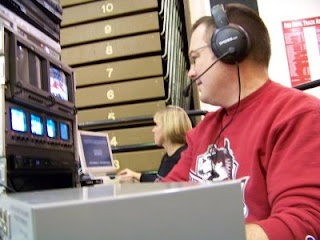 Kind of punchy after a sixteen-hour shift at the day job doing local election returns on community television.


I rolled out at 6 a.m., jetted downtown to our little town's only polling place and stood in a two-block line for 45 minutes to vote. Except for the surly guy saying that Obama was at the center of a terrorist plot, outlining an intricate storyline that wouldn't make a believable James Bond movie, it was a fairly jolly group. A mix of old and young and people with their kids. Somebody said they had never seen half of the people there before. I stood there and started reading Jim Butcher's first Dresden Files book as the sun rose on a pleasant fall morning.


My daughter joined me, home from college, and I talked to my son via cell phone in Indianapolis and tried to help him figure out where his polling place was. Driving to work, I passed another long line in a neighboring town.


That night we signed off at almost one in the morning and were too tired to think about what an exciting, memorable day it was. I hope everyone voted. In the great Heartland of America, what it means to be a citizen of this nation seems close at hand, but it is good to be reminded from time to time.

And now, back to killing a spaceship full of people via my keyboard and my new project. Give me a shout at johnoakdalton@hotmail.com.
Posted by John Oak Dalton at 10:02 PM No comments:

The Calliope Crashed to the Ground

I thought about trying NaNoWriMo again this year but am instead doing its equivalency as I just signed to do my 20th script project, a sci-fi/horror hybrid which unfortunately (for my blog) I am writing under a nondisclosure, with a first draft due just after Thanksgiving. For some reason everybody wants to do nondisclosures these days, which makes the blogitude a little thinner. If everyone just went back to wearing tinfoil hats so people couldn't steal their ideas we would all be better off.

A lot of rocky pavement lately but we had a nice Halloween Open House Friday night which I guess we may have forgotten to tell the astronaut, Zorro, Gene Stratton Porter and (I think) an Afghani princess wasn't a costume party, though the other thirty or so people thought otherwise. Yes, I know it sounds like a lame sitcom plot from the 80s, but it's true.

I took a twelve-year-old Jason, AKA my Little Brother Harold, trick-or-treating for probably his last time, and had my little Westie puppy Bonnie along for her first time. She only barked at one other dog, and one baby dressed like a dog.

Hitting the keyboard today, after taking my daughter to see (gulp) SAW V; catch me later at johnoakdalton@hotmail.com.