It's hard to believe it was one year ago today that b-movie filmmaker John Polonia passed away. This is what I wrote then:

John was an incredibly funny person who enjoyed home and family life and could talk movies with a great fervor. He turned this love of movies into a memorable filmmaking career.
John was a good friend to me and a lot of other filmmakers. He was a great lover of cinema and had a vast collection of movies stored on the shelves of his home and in his brain. He had a dream to make movies and lived that dream every single day since his teenage years. I spoke with him a few weeks ago about a new project I would rewrite over one of his scripts and he was as excited about these upcoming prospects as he was about every project.
I think we are too close to the Polonia Brothers' legacy for it to be properly measured. They first got distribution as teenagers and are noted for having one of the first shot on SVHS features to be accepted at Blockbuster. They produced and directed more than 30 features in 20-some years that were distributed direct to video. They were incredibly prolific and successful together and embraced a large fan base while being courteous to foes. Their role in the rise of VHS rentals, the mom and pop stores, the SOV era, and then the direct-to-video DVD boom, will have to be noted much farther down the timeline to see what they have really meant as people and professionals.
I can say in total honesty I have never met anyone like John. When I first saw "Blood Red Planet" I knew the Brothers were special as very unique filmmakers and I later came to learn they were incredible individuals as well.

I was thinking about the last time I saw John Polonia. My family was returning from a trip to the east coast and stopped in Wellsboro, Pennsylvania on the way back to spend the night and visit with the Polonia Brothers. John and Mark and I sat on John's porch late at night and talked about movies.

Even though John knew about the Polonia Brothers Fan Club and various reviews and all the people they knew and helped in the industry he always took an ironic tone with their fame/infamy. But I think he would have been pleasantly surprised at all of the website memorials and tribute videos on YouTube and so on that came out in the wake of his death.

At the viewing, I could just imagine John looking at all of the former cast and crew people there and saying, "Let's make a movie." It was the main sentiment he shared at a surprise birthday party that was thrown for the Brothers a few years before. I have no doubt that in that long weekend he could have cooked up a good one.

John was, ultimately, a family man who lived in a small town, down the street from his twin brother, who loved making movies. It was a purity of purpose and surety of self that I aspire to.
Posted by John Oak Dalton at 11:40 AM 1 comment:

I Keep Holdin' On Enough To Say

I have been slow on updating this humble blog lately, what with a friendly little root canal and a cozy sore throat keeping me away from the keyboard as of late. But I have been doing quite a bit of reading in my attempt to once again read 50 books this year.

If I seem suddenly cooler it is because I am updating from my new (to me) Mac G4. Now, to the mailbag:

New reader Adrienne writes that she is not an Oscars fan, but "maybe we'll start when you're up for an award...It's genuine, you are our best hope." Sadly, Adrienne basically wrote that she has to throw her television in the dumpster.

Loyal reader Jim writes "Just added Among Us, Peter Rottentail, and your other films to our Netflix disc and Watch Instantly queues." As Jim is Adrienne's husband, I fear his television is going to end up in the dumpster one way or the other.

Seriously, though, I hope they enjoy them, and I appreciate Netflix for putting them up there; and for delivering me a steady stream of DVDs at home, a welcome treat when I live half an hour from the nearest Blockbuster and ten minutes from the nearest video store of any kind, which is a Redbox at a MacDonald's.

New projects always bubbling; until later I am at johnoakdalton@hotmail.com.
Posted by John Oak Dalton at 7:22 PM No comments: 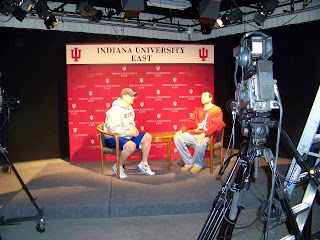 Taping "Red Wolves Rundown" at the WCTV studio on the IU East campus with my video production class.

Posted by John Oak Dalton at 12:12 PM No comments: 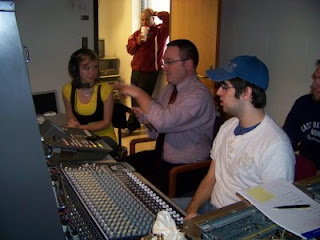 Corrupting the minds of the next generation of television professionals in the control room of WCTV, taping "Red Wolves Rundown" at the IU East campus.

Posted by John Oak Dalton at 12:01 PM No comments:

The Devil Jumped Up On A Hickory Stump

One day the barber shaves your earlobes, the next you decide to buy a corduroy jacket, then the next day you think, "You Know, England Dan and John Ford Coley had some good songs," and then the day after that you think you might look good in a sweater vest.

I am old and tired, it is February, it has gone from a foot of snow to tornadoes, and I have to have a root canal Tuesday.

On the bright side, for my readers who are horror fans, it is Friday the 13th. Those who have been, from their own perspectives, blessed or cursed by seeing a number of my movies might be surprised to learn that I missed pretty much all of the slasher genre of the 80s and thus do not feel the same resonance that some do at this holiday. I grew up on Japanese rubber monsters, Italian sandal epics, Mexican wrestling, and Russian Sci-Fi, but I had a long layoff from genre stuff in the 80s when I went to college and actually studied film. instead turning my mind towards Italian Neorealism, French New Wave, and so on.

In the late 90s I smelled a trend, like the boom of the mom and pop video stores in the late 80s that gave rise to many of my peers launching their careers when the content-starved VHS pipe opened up. I thought the same thing would happen again with DVD, and I felt that genre projects would be most needed. I was right, though loyal readers know I have been wrong; I once said that CDs would never catch on, as they were "just little records."

I gave myself a crash course in horror, and though I have still some gaps in my knowledge of giallo and Paul Naschy werewolf movies I think I was able to get caught up. I still don't understand the slasher genre, though those raised in the 80s probably feel that same twang that I feel about the original 70s Dawn of the Dead (I know the remake's supposed to be decent, but still).

That being said, if anybody wants to see the new Friday the 13th, I'm game (But I'd rather see Coraline). I try to follow trends and study likes and dislikes for future projects. As I have said before to loyal readers, writing is a craft that can be learned. It is not achieved by sitting under a tree in your boxers waiting for the muse, or, as I know some have speculated about my work, banging your butt cheeks up and down on a keyboard until a script coughs out.

Along the way, I became more of a fan again (Which was why I was thrilled anew when Fangoria mentioned me here). A good thing, because one thing I have learned about genre fans is that they can smell a rat. If you think genre writing is easy and anyone can just "bang it out," the fans will know. The other side of that is that genre fans are the most loyal fans there are (as seen by this very blog which, unbelievably, thousands have returned to from time to time). No less a person than screenwriter Michael Tolkin taught me that (he also once wrote me an email, believe it or don't).

Along those lines, some potentially interesting projects on the horizon; until later I am at johnoakdalton@hotmail.com.
Posted by John Oak Dalton at 7:53 PM 2 comments:

Lookin' at the Devil, Grinnin' at his Gun

If I might put on my day job hat for a moment, I think it is a good thing the digital transition has been moved. If you are reading this blog, or follow me on Twitter, or are my friend on Facebook, or are my colleague on LinkedIn, you are fine with the digital transition. But there are millions of people that aren't. Many of them I talk to every day, who don't know what's going on. There are many, many technically naive people who would be left out in the cold. Allow me to give some anonymous examples:

ANONYMOUS DAD: I need to use the internet at your house. Is it the same internet we have at work?

ANONYMOUS FATHER-IN-LAW (OVER PHONE): I can't get the internet to work.

ANONYMOUS SON-IN-LAW: You're going to have to hang up the phone now.

ANONYMOUS PROFESSOR CALLING HELPDESK: I can't find a video projector in this classroom.

ANONYMOUS HELPDESK PERSON: Did you look on the ceiling?

ANONYMOUS PROFESSOR CALLING HELPDESK: All that's there is something called a Toshiba.

And so on, some too painful to recall.

I was asked to serve as a judge for the Media Arts panel for the Indiana Arts Commission again this year, helping award grants. I hope it does not speak to the state of art in Indiana that I have been asked to rejoin this august group. I enjoyed judging before and am happy to serve.

Under threat of a junk-punch from the ghost of Bruce Lee I have sworn to catch up on script coverage I have promised as well as emails I owe between gaps in my latest (nondisclosure) script rewrite (Hint: The Christian Bale rant making the rounds right now holds a peripheral, tertiary clue). So until later, I am at johnoakdalton@hotmail.com.

Waiting to get notes on a nondisclosure script I shot through the ether, and in the meantime trying to catch up on The Tudors, read smarter, return emails, nurture my new Facebook account, give script coverage to people I promised some to.

Respect to my Hoosiers for all the mad pub the Crossroads of America has been getting lately.

First we have Katie Stam, the first Hoosier to be Miss America.

Then we have Skeeter Hines, perhaps not a household name yet but a former student of mine who worked on the prize-winning Doritos ad that aired during the Super Bowl. Oh, also the other dudes that worked on it were Hoosiers.

It is now February, and not a moment too soon. A big-ass load of snow dumped on us a few days ago and then drifted over all weekend; though not before I got to eat at a very good restaurant Saturday night.

Until later, I am at johnoakdalton@hotmail.com.

Posted by John Oak Dalton at 9:02 PM No comments: