Another Park, Another Sunday

Once Upon A Time my filmmaking pals Jason Santo (who I met through rewindvideo.com), Gary Lumpp (who I met through Triggerstreet), Joe Sherlock (who I met through b-independent.com) and myself started swapping microcinema tapes through the mail and writing each other long, sometimes funny emails filled with our opinions. Then Jason got the bright idea to start a website, Microcinema Scene, and we were all surprised when it shot into the stratosphere. A couple of years down the road, and the keys have been turned over to another pal o' mine, "Sex Machine" director Chris Sharpe, formerly of Eyeball Magazine and Cinema Eye and some other hipster spots. I'm glad the site is soldiering on, and I hope you go look at its soft launch today.

Afterwards, give me a shout at johnoakdalton@hotmail.com.
Posted by John Oak Dalton at 7:45 PM No comments:

The sun is out and the blizzard is melting. Now we have "freezing fog" and, apparently, sandbags against the coming flood. Is it spring yet?

My pal Christopher Sharpe is posting some interesting tidbits about Sex Machine at his website, here.

My other pal, Brice Kennedy, who appeared in Peter Rottentail and Hellshock/The Da Vinci Curse/Black Mass/Dead Knight, chats about my movie and the Polonia Brothers' latest, Splatter Beach, which has girls in bikinis, which I had nothing to do with, as all the bikini girl movies they keep for themselves. More from him here.

Give me a shout at johnoakdalton@hotmail.com.
Posted by John Oak Dalton at 10:16 PM 2 comments:

SEX MACHINE streets May 1, y'all!

Just when I thought STUDIO 60 couldn't get any hipper, it did. A sexual harrassment lawyer shows up at the set at 10 p.m. to investigate a claim and sits around swilling booze and giving out her phone number. The ultra-conservative Christian on the show jumps between two boyfriends, one of whom has fallen back into drug addiction, and is acting in a movie where she simulates drug abuse and manslaughter. They are so unbelievably hip, they exist in a parallel dimension of hipness, and I can only peep through the window for an hour on Monday nights. I am almost about to quit watching it. Only I fear that their attacks on Midwestern life will spring back up.

I have been told by my family that I basically have to give up my entire lifestyle for Lent.

Give me a yell at johnoakdalton@hotmail.com.
Posted by John Oak Dalton at 8:10 PM 2 comments:

Email ThisBlogThis!Share to TwitterShare to FacebookShare to Pinterest
Labels: Television

Saw that photo of you in your snow suit shovelling snow and it immediately cleared up some writer's block I was experiencing. I was having absolutely no luck being able to visualize a serial killer from small town Indiana so I could create the character... Then, I saw that photo... :)

This month's Premiere magazine has an artice about "DTV," the cool new name for direct-to-video fare, and how it is performing extremely well for companies. One interesting note the article mentions is that a lot of writers and directors will take a chance on DTV because they would like to get the work, but many actors still won't touch it. I'll have to show the article to the next person who asks when I am going to make some "real" movies.

I was waiting in a bookstore down the way from where my daughter was getting her hair done for Winter Dance and happened to grab a Fangoria off the shelf and open right to the reviews of my pal Jon McBride's recently re-released cult classics Woodchipper Massacre and Cannibal Campout. These two SOV features are finally coming up from the underground and getting the recognition they deserve as products of their time. Cannibal is downright skin-crawling and Woodchipper is a surprisingly funny dark comedy; both shot on glorious SVHS, circulating among afficianados and hard to find for close to twenty years. Jon has given me great advice over the years, and as "Wayne Beaubier" stole some scenes in my bigfoot movie Among Us, so I wish him nothing but luck with this latest good fortune. Definitely look for these, new on DVD for the first time.

Give me a yell at johnoakdalton@hotmail.com.
Posted by John Oak Dalton at 11:14 AM 2 comments: 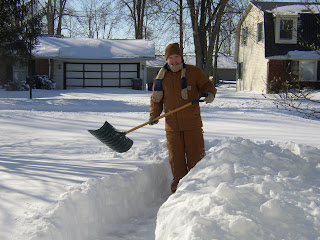 A blizzard hit the midwest Monday night, with snowfalls not seen of this magnitude since those crazy 70s blizzards we all remember so fondly. Except I was too little to have to dig out of those ones. We had hip-deep snow around most of the house, except thankfully the front, which was only knee deep (depicted here). I am shown clearing a path to the mailbox so we could put some Netflix DVDs in, but unfortunately the mail didn't come today. Too bad, we may be here a while, and could use some new movies. We watched "An Inconvenient Truth" while more than a foot of snow fell outside last night. A writer's life should be full of irony. Give me a yell at johnoakdalton@hotmail.com.

Email ThisBlogThis!Share to TwitterShare to FacebookShare to Pinterest
Labels: Photos

A trailer for RAZORTEETH has popped up on YouTube here. Somebody needs to get this shit in hand. Half my career's up there.

If I could get all meta for a moment, when I rebuilt my blog I lost track of my stats counter. But it was still there in the background, ticking away. I caught up to it the other day and learned that I had more than SIXTEEN THOUSAND unique visitors last year. I didn't know I knew that many people; unless my brother is going around to a lot of different terminals to check site updates. Anyway, thanks for all that, and I will try to be more interesting.

Give me a shout at johnoakdalton@hotmail.com.
Posted by John Oak Dalton at 8:52 PM No comments:

I had a wake-up-screaming nightmare last night in which I was attacked by a big crow. Edgar Allen Poe, Ted Hughes "Lovepet," those crows in "The Wiz," I don't care what, a dream where you get attacked by a crow is a pretty evil-assed portent. Maybe it was the spicy jambalaya I ate right before bedtime. I walked around carefully, expecting something to fall, and it did; about a half-foot of snow, and subzero temperatures.

I meant to blog about my war against STUDIO 60 but this week's episode was so full of contrived couplings and breaking aparts that I sort of can't absorb it all. At least LOST is on tomorrow.

In the meantime, I am slugging away on MENTAL SCARS for producer Richard Myles and hope to deliver a completed rewrite shortly. Seems like every producer I talk to lately is living someplace warm, making the sky a little grayer here. But soon spring will come to the heartland.

Give me a shout at johnoakdalton@hotmail.com.
Posted by John Oak Dalton at 10:20 PM No comments:

I've loved my Colts for a long time, but even I didn't think they were going to do it. Face it, Hoosiers, I bet a lot of you in your heart of hearts didn't, either.

Now the Colts are so popular I almost want to jump off the bandwagon. I have always felt more comfortable supporting the perennial losers. As Philip K. Dick said, "Anybody can be a winner."

Give me a shout at johnoakdalton@hotmail.com.
Posted by John Oak Dalton at 9:13 PM No comments:

My Milkshake Brings Feds to the Yard

Meatwad off to Abu Garib. My old movie pal Jason Santo is okay, though.

Another old movie pal Tyler Tharpe's new movie, RETURN IN RED, comes out in a week or so. Peep an old-school trailer here.

I report, your ass decides.
Posted by John Oak Dalton at 7:36 PM 1 comment: