But Your Mind's on Tennessee

I was very flattered to have THE GIRL IN THE CRAWLSPACE part of a movie marathon for Indie Horror Showcase at the Danbarry in Huber Heights, Ohio.  There was a warm crowd of cast, crew, friends, and (I think) receptive strangers.  It was my first screening at an actual movie theater and, having not viewed it since Christmas, nice to see with fresh eyes. 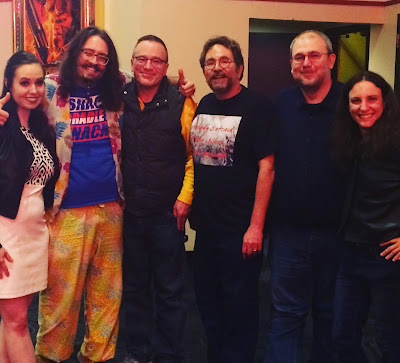 My second feature SCARECROW COUNTY is winding its way through post and I'll give you more news as soon as I have it.

Say what you want about GAME OF THRONES, but as my wife pointed out, it shows that we as a people still want and need good storytelling (and shared cultural experiences).  For my part, I thought it started literature-sized and ended up kind of television-sized, for what that's worth.

But the best thing that happened is that in between Sundays I watched Season Three of TRUE DETECTIVE.  Sometimes I binge on a day of SyFy movies or some guilty pleasures from my Netflix queue and wonder where all that screenwriting money is that got thrown on the ground.  But when I watched this past season of TRUE DETECTIVE I felt unworthy.  From the opening shots--which, to me at least, were a riff on Chester B. Himes' novel BLIND MAN WITH A PISTOL--to the very last shot, where our tarnished hero goes off into the jungle, and the jungle of his mind, I thought it was great writing and storytelling.  So if you haven't shut off HBO yet--we haven't, because we are waiting for the DEADWOOD movie--then there you go.

I guess there is a lot going on with the WGA and I am trying to follow it all on Twitter, but it's sort of like following a far-off war in a country I'm never going to visit.  In the meantime I am sitting at a little handmade desk that a large animal vet used to work at, early in the morning, listening to a spring thunderstorm growling through my five acres and petting a scared dog, rattling around in my skull what I might do next.

Thanks for hanging around until then.

This blog post first appeared in my e-newsletter I WAS BIGFOOT'S SHEMP.
Posted by John Oak Dalton at 6:28 AM No comments: