One Last Bell to Answer

This post first appeared in my e-newsletter I WAS BIGFOOT'S SHEMP.

Finally wrapped for well and for true on SCARECROW COUNTY Saturday night in Dayton, which started with a scene where the actors use a Ouija board to summon a scarecrow, as one does, and ended with a surprise blast of ice and snow on the way home. 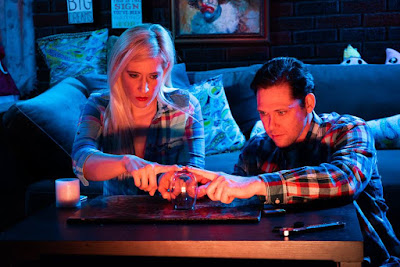 This cold open (so to speak) for the movie features Joe Kidd and Iabou Windimere, a real-life married couple who were also the cold open couple in HAUNTED HOUSE ON SORORITY ROW, a movie I wrote for Henrique Couto, and as it happens I met them on the set the night they shot that scene for Henrique.  In fact Joe began to speculate as to whether they might have a career as a cold open couple, as some people do playing dead bodies on tons of television shows.

Iabou plays the newscaster, and Joe the mysterious gunfighter, in THE GIRL IN THE CRAWLSPACE, which we also shot on the pickup day outside of principal.  My movies keep gently weaving themselves together, in my mind and elsewhere.
On the last full day of shooting THE GIRL IN THE CRAWLSPACE, I gave my four leads--Erin Ryan, John Hambrick, Joni Durian, and Tom Cherry--each a book as a thank you for being a part of the project. All four books were important to me and in some way influenced the movie. Those books were Marisha Pessl's NIGHT FILM, Emily St. John Mandel's STATION ELEVEN, Ursula Le Guin's THE LATHE OF HEAVEN, and Jim Thompson's THE KILLER INSIDE ME. 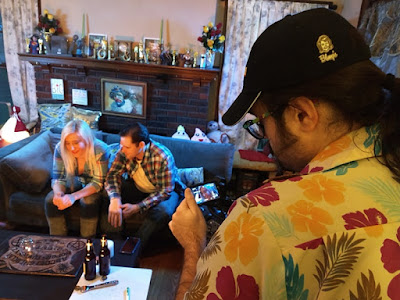 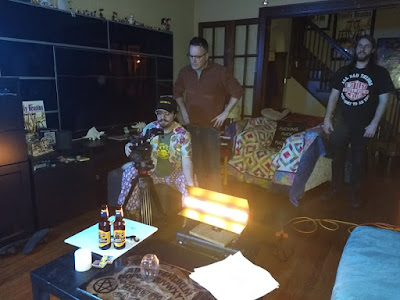 When I wrapped principal on this film, I did the same for my three leads Chelsi Kern, Rachael Redolfi, and my old friend Tom Cherry (again).  These books were Ursula Le Guin's THE LEFT HAND OF DARKNESS (which Chelsi's character is seen reading in CRAWLSPACE, actually), I SHALL DESTROY ALL THE CIVILIZED PLANETS by Fletcher Hanks (a comics collection), and FUN HOME by Alison Bechdel (a graphic novel I gave to Tom, although Chelsi was acting in the musical version of it on stage in Fort Wayne while also shooting SCARECROW).  All three of these works have something to do with the making of SCARECROW COUNTY and I hope you see the connections when the film comes out.

Now SCARECROW COUNTY heads into post, and I'll share more news when I have it.  Thanks for reading.
Posted by John Oak Dalton at 9:00 PM No comments:

This post first appeared in my e-newsletter I WAS BIGFOOT'S SHEMP, which you can subscribe to in the sidebar.

I have been remiss in not talking about two things.

First, my brother called BS on me for not including John Cougar Mellencamp's "Scarecrow" on my Secret Soundtrack of songs for SCARECROW COUNTY, and he was totally right--not only the obvious title but Mellencamp's Hoosier roots.

Second, I keep forgetting to talk about watching Orson Welles' formerly long-lost final film THE OTHER SIDE OF THE WIND, which I watched right in the middle of the week between the two big shooting spates on SCARECROW COUNTY.  The caveat here is that it fits right in my groove--that time period when the studio system, staggering and out of touch, imploded on itself and gave rise to independent film, as goaded on by French, Italian, and Japanese filmmakers--that is, until movies like STAR WARS and JAWS and other summer blockbusters pushed it to the margins again.  I liked it so much I immediately stayed up late watching the documentary on its making, THEY'LL LOVE ME WHEN I'M DEAD and am just about done listening to the audiobook ORSON WELLES' LAST MOVIE by Josh Karp.

Orson Welles, whose CITIZEN KANE is so visionary, mostly because there was nobody around to tell him not to do things, and he didn't know any better.  Then decades of crashed projects and unrealized dreams, a few more flawed masterpieces, and then, at the end of his life, tooling around with a skeleton crew of hippies pretending to be a college film crew to avoid permits, and outrunning bills to finish one more crazy movie.  Broke, crashing at Peter Bogdanovich's place, doing commercials for cheap wine to get to the next day.

Welles, an ogre, a charmer, larger than life, petty and small.  But lurking in the background of this story is Gary Graver, a prolific b-movie and adult film director who gave his life over to Welles for six years as DP of this film, hoping it would catapult him into the big leagues alongside the legendary auteur.

Orson Welles is a legend and a master now and forever, but my heart is with Gary Graver, one of us.

It's a long ways for most of my loyal readers, but the awesome independent movie house Film Scene is screening THE GIRL IN THE CRAWLSPACE in April in downtown Iowa City, and how cool is that?

More soon.  Thanks for reading.
Posted by John Oak Dalton at 10:32 PM No comments: