'Neath the Cover of October Skies

This post first appeared in my secret e-newsletter I WAS BIGFOOT'S SHEMP.

I've just wrapped up four weekends in a row of screening SCARECROW COUNTY, from Iowa City to Englewood Ohio, and it was a fun run.  We averaged 25-50 people at each screening, and it was a good mix of cast and crew, old friends and new, fans and (I hope) newly-converted fans.

The most interesting Q&A was probably in Iowa City, where discussion ranged from Ursula K. LeGuin to Steve Alford, but the best audience reaction was at the Englewood Cinema, where somebody yelled "KILL HIM!" when the scarecrow began chasing Jeff Rapkin's character Cotton.

In the middle of all this, SCARECROW COUNTY got picked up for distribution, and more details on that will be available soon.

And also in the middle of all this I had an infection that sent me to the hospital for a day.  This caused me to cancel my trip to Columbus Ohio to give a screenwriting talk, which I was deeply sorry for, as I was looking forward to that one a lot.  And I'm on my second round of antibiotics trying to kick it, so between good times and bad I didn't get to all of my October challenges.

We only saw a handful of horror movies, but my running away favorite was the zombie movie THE NIGHT EATS THE WORLD, if you haven't caught that one.

I only got in a handful of #inktober sketches as well.  My most popular sketch--as voted on by Facebook and Instagram likes and comments--was this "dream team" Fantastic Four line-up I revisit every year. 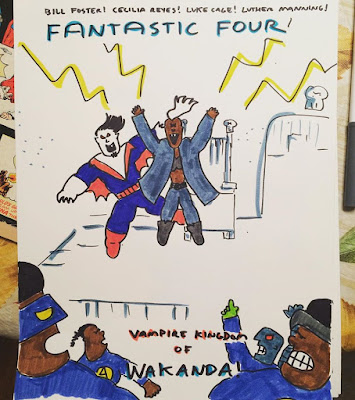 I don't think Cecilia Reyes ever had an X-Men name, but the others are Black Goliath, Power Man, and Deathlok, squaring off against Moebius the Living Vampire and Bloodstorm, an alternate universe version of Storm, and who wouldn't want to read this comic?

I've been poking around on some short stories for my pal Henrique Couto's podcast WEEKLY SPOOKY, and the first one aired last week; you can listen to I SAW THE DRAGON here or here.  I originally called it I DREAMED I SAW DON "THE DRAGON" WILSON if that tips you over into listening to it.

Trying to get the machine running on whatever is next; thanks for sticking around until then.
Posted by John Oak Dalton at 6:33 AM No comments: