The Curse It Is Cast

My blogging has slowed down to a trickle of late, though I have been able to keep up with Twitter at a mere 140 characters at a time (and if you aren't on Twitter with me, Oprah, President Obama, Ashton Kutcher, John Mayer, and millions of others, why aren't you?).  I've also done okay keeping up on my reading.
Perhaps the sluggish blogging was the letdown from reaching 1,000 posts at about the same time as my fifth anniversary of this humble site (which, scarily, is something close to a post every other day for the last half-decade, for loyal readers and poor mathematicians).
Perhaps it was also the long winter, breaking a filling and getting a root canal, breaking the root canal, hosting the Chamber of Commerce at the office, then changing jobs, getting the flu (hopefully it wasn't the damn swine flu), having my wife get the flu (ditto), presenting at a conference, the end of a semester teaching video production, and a few other events I am forgetting as things are a bit blurry around the edges at present.
What else could have kept me from blogging about Watchmen, a cinema event I have waited for for several decades?
Astoundingly, I find myself, while googling away, in the humble minority amongst fanboys in my unstinting praise for this film.  Why comic book fans have not marched upon Hollywood and pledged unyielding fealty to Zack Snyder I have no idea.
For a graphic novel long thought to be unfilmable, so much was there, including dialogue and even shots framed right from the comics.  Great casting and a reverent rendition.  The use of music and the idea to keep it in its 80s time frame were sure-handed.  The DVD release of extras, done practically concurrently, was innovative.   The opening gave me chills.  I think they actually improved the ending.  I honestly don't know, unless it was made into an HBO miniseries of something, how it could have been done any better, or by anybody else, or at any other time in the last twenty years or so.
My dream of Watchmen was realized.  My dream for the other milestone graphic novel of that era, The Dark Knight, may never come to pass, as too much time has marched by, and with it my fantasy of Clint Eastwood or Michael Douglas playing Batman and Arnold himself playing Superman, and wouldn't that have been a cool movie?
But one little thing about Watchmen scratched at the back of my mind.
At the end of the book (twenty year old SPOILER), asked to tarnish his curious code of honor to prevent the world spinning into Armageddon, the vigilante Rorschach utters the immortal line:
"Joking, of course."
A tagline for every disenfranchised comic book-reading, Star Trek-watching, D&D-playing dude of that era, and one my friends and I would utter when our own curious codes would be challenged or questioned.
"Joking, of course."
A line for the ages, missing from the definitive unfilmable film--which is why I must only give Watchmen a nine and a half.
Who's ready to go see Star Trek?
Give me a shout at johnoakdalton@hotmail.com.
Posted by John Oak Dalton at 6:56 PM No comments: 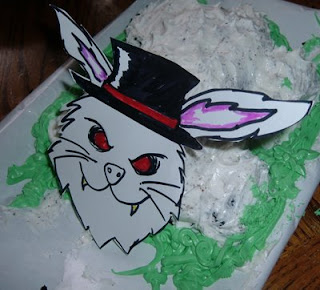 Every year my pal Tim Shrum, de facto president of the Polonia Brothers Fan Club, bakes a cake based on a classic Polonia Brothers movie. Whether he has other issues or not, I'm not sure. Once again this year Tim picked one of my own scripted projects (after doing "Among Us" before). Strange enough to have a script turned into a movie, but then turned into a cake really takes--well, you understand. Thanks, Tim!
Posted by John Oak Dalton at 8:43 PM 1 comment: