On We Sweep With Threshing Oar

Although this has already debuted on streaming, if you dig physical media you can buy Scarewaves everywhere, today.  I wrote a segment for this fun throwback-style horror anthology called "Fair Scare" that starts a little "Double Indemnity" and ends a little "Dawn of the Dead."
Posted by John Oak Dalton at 8:29 PM No comments:

Email ThisBlogThis!Share to TwitterShare to FacebookShare to Pinterest
Labels: Scarewaves

They Rode the Sunset, Horse Was Made of Steel 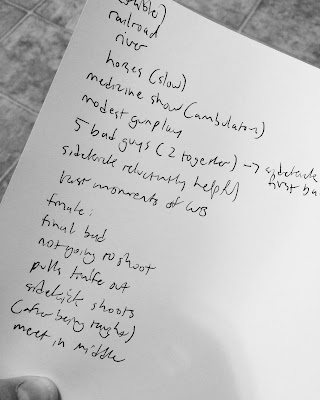 If you weren't at the World Premiere of "Calamity Jane's Revenge," or haven't watched the Limited Edition Blu-Ray/DVD combo--and why haven't you?--don't read this post.

When director Henrique Couto called me on the phone and asked if I would be interested in writing the movie I grabbed this sheet of paper out of my sketchpad and wrote these notes.  Then promptly lost track of this paper and had to write the script from what I remember writing down that night.  And I think I remembered this cryptic note pretty well.

Screenwriting secrets revealed!  This is all of the outlining I did for the screenplay, but spent about a week moving the furniture around in my mind before I started writing.
Posted by John Oak Dalton at 8:21 PM 2 comments:

There are two things I love about Bloomington Indiana; my brother lives there and the IU Cinema is there (not in that order).  On Friday I got to see filmmaker John Waters there, first giving a talk, then screening “Cecil B. DeMented”, then doing a Q&A.  I went away liking him even more than before.  (I think) we both feel there are enough people in the world waiting for a new Transformers movie or new Fast and Furious movie and we would in general prefer something different.  I for sure have always been attracted to the grassroots DV projects, backyard VHS epics, photocopied comic books, stapled zines, homemade mix tapes with bands nobody has heard of, the great homemade world most people don’t care about.

I found out when I jumped down that rabbit hole, decades after John Waters did, that there are a lot of people that feel the same way.  And those people can become your fans and when they do they are very loyal.  For instance I was more than shocked when, after several years of self-imposed exile from screenwriting, I learned people noticed I was gone and cared that I was coming back.

But it’s a double-edge sword because you also have to suffer the slings and arrows of those who don’t understand why you feel that way.  I listened to John Waters field questions about making “kitschy” and “bad” things and his love for such things.  When people ask me in interviews or casual conversation, “what’s the worst movie ever made?” I always think, I wonder if somebody has ever asked my hero Michael Tolkin that (he replaced William Goldman because he once wrote me an email after reading this blog, and William Goldman has never done that)?  But now I will be all like, well, if John Waters has to listen to it, I guess I will too  (for the record, I always say “Triumph of the Will”).  Because John Waters seemed a little taken aback and ended up kind of defending himself and saying, well I like foreign movies too (as seen in “Cecil B. DeMented” when everybody from Castle to Fassbinder to Anger to Peckinpah to Lean is name-checked).

But there is something worse than this, and that is nobody caring.  There are literally tens of thousands of movies that dropped like a rock in a pond and did not leave a ripple (and I have written some of them).  So when a movie I worked on more than ten years ago, “Peter Rottentail,” bubbled to the surface recently, I couldn’t have been more thrilled.

First, I learned that the British website Nerdly rated it one of the Ten Worst Horror Movies Of All Time .

And more recently, Fangoria did an hour-long podcast with the movie as its subject.  Of course they thought it sucked, and it sucked so bad that one host had to listen to my audio commentary track to try to internalize why it sucked so bad.

And I was happy.  Just think, I have been reading Fangoria since I was a kid (though admittedly I always liked Starlog better).  And some Fangoria guys talked about a movie I worked on a decade ago for a solid hour.  Okay, I wasn’t thrilled that the one guy gave me that “duh duh duh” voice that mad girlfriends give their boyfriends the world over, but as far as the movie review, I was happy.

Because getting your movie labeled the worst actually attracts, like a moth to flame, people like me.  Which is who I wrote it for.

You have to sniff past what I call the Joe Bob Briggs phenomena—reviewers drinking and half watching, or working up quips and half watching—and sometimes that is frustrating because they come in with preconceived notions, and often the biggest one is mixing up “stupid” and “cheap.”   I feel the burn right now on “Jurassic Prey,” which I am very proud of the script for, but a lot of people dismiss as inherently stupid.   In fact I wrote a whole blog post about this idea, upon the release of “Sharknado 2”, so I won’t go over it all now   But apples to apples, I would challenge anyone to read my script for “Jurassic Prey” and say it is worse than some thunderously stupid, but very attractive, blockbuster movies out there.  One has the resources of Skywalker Ranch, the other Dollar General.  And apples to apples, that’s not on the screenwriter.  But it is the reality.

“Peter Rottentail” was the second movie ever made from my writing, even though I had sold several screenplays by that time.  I was working on the set of the bigfoot movie I wrote for the Polonia Brothers, “Among Us,” which was my first movie and has had good legs on its own, when the distributor called and said he would need three more movies that year.  It was the go-go time of the direct-to-DVD boom, and I was in the right place at the right time.  However I told the brothers I could not write three more movies that year, which would be nothing to me now (I believe my record is seven in one year) so they agreed I would write one more and then rewrite two of their existing scripts.  So when I got back from the shoot a package came in the mail—it was the handwritten, on lined paper, version of a movie called “Psycho Clown” which I was to turn into “Peter Rottentail.”  I typed it in and rewrote it at the same time, and I believe I finished it in a long three-day weekend.  I had a lot of fun with it.  It was never meant to be taken seriously and I think I wrote it with some delirious intensity (I don’t believe I’ve ever done another one that fast).  I have not sat down to watch it with fresh eyes after so many years, but I am sure it does not help that DV technology has advanced quite a bit—I am certain the credits were done on a Video Toaster—and that even by the days’ standards it was made at a very threadbare cost.

But I’m proud of my part of it, and I know some people like it (and some people really like it ) and if I am going to give any small nugget of hard wisdom to aspiring screenwriters reading my blog it is this; that you should be proud of everything that leaves your keyboard.

So thanks to Nerdly and Fangoria for bringing new people to my old pal Peter Rottentail.
Posted by John Oak Dalton at 8:50 PM 1 comment: