In Dreams I Walk With You

This post first appeared in my new newsletter I Was Bigfoot's Shemp, which you can subscribe to right here.

I think this was a work anxiety dream; that I was hired to write a DC comic book series, but at the last minute also had to draw it.  What I remember was a splash page where Doctor Fate arrives, with the skull of Red Tornado, to present to the Invisible Kid.

This was the second Invisible Kid, Jacques Foccart, added after a long run of having only white heroes in the Legion of Super-Heroes (if you don't count green and blue characters).  Later in DC Comics continuity Invisible Kid gets elected President of Earth, with Tyroc (actually one of the first African-American superheroes introduced in DC, ever) named as Vice President.  Naturally, the Earth subsequently blows up, putting Invisible Kid, Tyroc, and some other survivors on a New Earth, floating through space.

Mercifully, DC Comics has forgotten this ever happened.

In my dream, New Earth is stranded, melancholy, at the end of time, guarded by Doctor Fate's Tower of Fate.  This image struck me so much that I tried to draw it, to purge myself of the memory.  Here is the splash page from that imaginary comic: 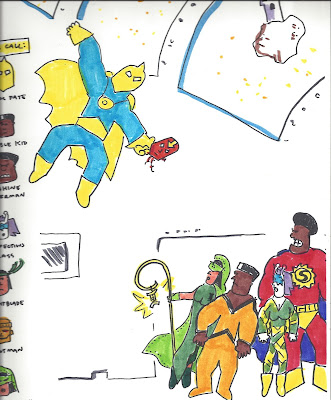 When I got back into reading comics in the 1980s one of the first comics I fell for was Jon Ostrander's SUICIDE SQUAD.  I wish I still had my signed copy of SUICIDE SQUAD #1, one of the few possessions I don't have any longer I would like to wish back.  So that's why COPRA is so awesome to me; an unapologetic riff on that 80s SUICIDE SQUAD comic by a guy named Michel Fiffe who must have read it as religiously as me.  Although that may be a small audience, what I think has resonated with people--and made this a cult sensation--is that the guy writes and draws it himself, and sells it on Etsy.  It's a model a lot of people are interested in, and he is succeeding at it.

I am also reading BITCH PLANET, which is getting a lot of attention, written by Kelly Sue DeConnick as sort of THE HANDMAID'S TALE meets ORANGE IS THE NEW BLACK.  In a near future, "non-compliant" women are sent to a remote prison planet, and the action revolves around the subculture there as well as Earth's reaction to it.  It's the kind of comic book you suggest to people who don't read comics at all.  Interesting for its social and political commentary but also a fun comic.

And lastly I am working my way through THE SANDMAN: OVERTURE, a long-awaited addition to THE SANDMAN comic book series, really a milestone work in comics by author Neil Gaiman.  It relies somewhat heavily on being in love with the original run almost twenty years ago (and remembering it clearly), but the comics are so beautiful to look at it's worth it just for that.  The artist is JH Williams III, whose run on BATWOMAN blew a lot of people's minds.  I am reading this in trade paperback from the local public library, and it has plenty of extras packed in it to make it, I am guessing, the way to read this one if you are so inclined.