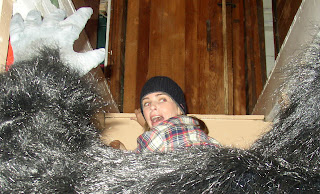 With my new series of articles "I Was Bigfoot's Shemp" appearing at Microcinema Scene, and AMONG US playing on the Space Channel, it dawned on me that I had never posted photos from my trip to the set of the feature--shot in the Grand Canyon of Pennsylvania way back in 2003--and maybe it was past due. Here we see stalwart heroine Hunter Austin beseiged by Bigfoot, in a photo I took that was later photoshopped into a pretty good DVD box cover.

Email ThisBlogThis!Share to TwitterShare to FacebookShare to Pinterest
Labels: Among Us, Photos